A Prophet on the Periphery: The Legacy of Martin Luther King Jr. - Seedbed
close
Menu 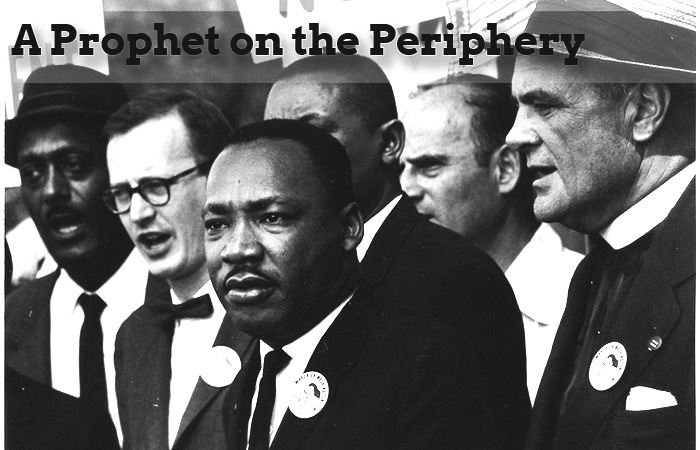 Until recently, biographers and historians have focused on Martin Luther King, Jr. as a liberal theologian or social activist, at times losing sight of the black preaching tradition as a formative factor in King’s ministry. As Baldwin observes, books narrating his life and ministry have strongly emphasized his debt to Biblical categories, to Mahatma Gandhi, to American democratic principles, and the liberal Christian theology and ethics, thereby giving the impression that he owed little to his cultural heritage.[1]

This is a particularly regrettable reality while reading King under the rubric of the prophetic imagination because the prophet’s rhetoric is always particularized for the people to whom he preaches.

An appreciation of audience is essential in the African American tradition for three reasons. First, the historical account of African American Christianity is unique within the American religious landscape because of the pre-Enlightenment assumptions of many of the “foot soldiers.”[2] Second, the rhetorical strategy the prophet employs in the Black tradition depends largely on the composition of his congregation.[3]  Finally, an investigation of the prophetic imagination of Dr. King cannot ignore the black tradition as the main ingredient of identity construction because “the traditional marginality and isolation of African Americans from mainstream American society have forced their socio-politico-religio-economic necessities to become relevant pulpit topics in congregations’ quest for life and liberation.”[4]  Therefore, if we ignore these social realities which so clearly weigh upon King’s audience, we inevitably exclude King’s voice by making him more palatable to our own sensitivities. And in doing so, we become part of the very thing he lived and died to criticize.

A prophet’s presence on the periphery of a particular political economy possibly functions as his/her most formative sociological factor. The African American experiences, traditions, and remembrances are, therefore, essential to an understanding of King as an American prophet. Brueggemann’s breakdown of the prophet’s habitat provides the profile for our analysis. He has observed that “the subcommunity that may generate prophecy will participate in the public life of the dominant community; it does so, however, from a certain perspective and with certain intention.”[5] These perspectives and intentions we will engage in the next post.