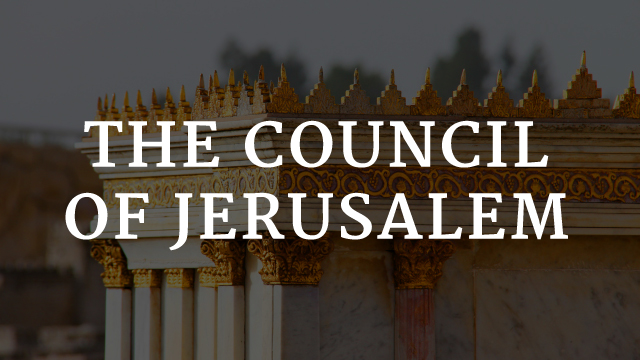 The Jerusalem Council in Acts 15 has gotten a lot of attention of late. Those who want to change The United Methodist Church’s position on same-sex practices cite it frequently. Last November, in an open letter to the Northern Illinois Conference, Bishop Sally Dyck announced “open gatherings” in her conference to discuss our current crisis by framing the conversations based on Acts 15 (read it here). She opined that the Jerusalem Council “found itself in a conflict over the law as well as accepted and deeply held assumptions and traditions about who people are (circumcised or uncircumcised).” She went further by saying the Jerusalem Council “found a way to be together that seemed to work.”

Recently Rev. Adam Hamilton proposed here that we should imagine three “buckets” into which Scripture can be divided, and said the following. “The Apostles, in Acts 15, determined that most of the laws like these [pertaining to circumcision, animal sacrifice, dietary kosher laws, etc.] were no longer binding upon Christians.” (See my response to the “buckets” here.)

I’m not the first to raise questions about this analogy. It is doubtful whether a comparison between our debate over sexuality and the Jerusalem Council’s debate over Gentiles has the power to overrule other evidence in both Old and New Testaments arguing against acceptance of same-sex practices (Richard B. Hays, The Moral Vision of the New Testament; HarperCollins, 1996, 395-400).

Moreover, this application of Acts 15 involves misreadings of the text. The source of the conflict was former Pharisees (15:5), who were insisting that it was necessary for Gentiles to convert first to Judaism before becoming Christians. The Council ruled against their particular understanding of what it means to be a Christian. The judgment of the Council was not to overturn the ritualistic laws of the Old Testament, but the opinion that Gentiles must become good Jews before they could become Christians. The question was the nature of conversion, and the debate only indirectly raised the question of Mosaic law.

In fact, James and the apostles gathered for the Jerusalem Council would have been shocked to learn that some today are suggesting they overturned Mosaic law. As part of the deliberations, James concluded, “After all, Moses has been proclaimed in every city for a long time, and is read aloud every Sabbath in every synagogue” (CEB, Acts 15:21). The point of this sentence, which was part of James’ conclusion, is that the Gentiles learned the central tenets of Mosaic law long ago. They should have no objection to obeying the main principles of that law.

And what were the central tenets of that law, which the apostles decided should apply to Gentile believers? These are stated succinctly in the “Apostolic Decree” of v. 29 (and compare v. 20). The decision of the Council was that Gentiles were to be included in the people of God. They made that determination based on Scripture itself, specifically basing the requirements for Gentiles on what the Torah requires of Gentiles. James and the apostles decided Gentiles were included as Gentiles, rather than requiring them to become Jews first. The question taken up by the Jerusalem Council was whether Gentiles must first become Jews in order to be included in the people of God. To this question, the Council gave an emphatic answer: Gentiles were members of the people of God by their faith, just as Jewish believers were included because of their faith (v. 11). Neither group was counted among the people of God because of their ability to keep Mosaic law.

Yet concerning the law, there is one important fact about this Apostolic Decree being neglected in our current debate. The apostles decided upon four prohibitions required for Gentile believers: (1) they could not eat food offered to idols, or (2) blood, or (3) meat from strangled animals, and (4) they must abstain from sexual immorality. For many years, scholars were uncertain how the Jerusalem Council landed on these four prohibitions. The best explanation is that these four are based concretely on Leviticus 17-18, and especially on the recurring phrase “the aliens who reside” (NRSV) or “the immigrants who live” (CEB) among the ancient Israelites. The apostles systematically searched these two chapters of Mosaic law and found five occurrences of the phrase (Leviticus 17:8,10,12,13; 18:26). These occurrences explain what non-Israelite foreigners were obligated to do while living in ancient Israel. And the four things prohibited in Leviticus are then repeated in the exact order as listed in the official version of the Apostolic Decree in Acts 15:29. (For details on the Apostolic Decree, see Richard Bauckham, “James and the Gentiles (Acts 15.13-21),” in History, Literature and Society in the Book of Acts, Cambridge University Press, 1996; 154-84, esp. 172-78).

In this way, the apostles equated “sexual immorality” (porneia) with the sexual prohibitions of Leviticus 18. They were, in fact, establishing a new Christian sexual ethic for Gentile believers, as part of their Apostolic Decree. And the foundation of that new Christian ethic was Mosaic law.

In reality, the apostles believed they were requiring of Gentile believers precisely the four commands that the Torah itself requires of them. It would never have occurred to them to question whether the instructions for holy living contained in the Torah might not apply to their day. On the contrary, the apostles were searching for instructional principles (the nature of “torah”) for their new context. This was in no way setting aside the authority of the Old Testament law, and I feel confident in saying James, Barnabas, Paul, and Peter would have been shocked at the suggestion they were doing so. In their minds, they were, in fact, affirming Mosaic law for Jews as Jews, and for Gentiles as Gentiles.

The appeal to Acts 15 as evidence for overruling Mosaic law is ironic. It is especially incongruous to appeal to the Jerusalem Council for evidence in favor of redefining Christian sexual ethics.

Learn more about Bill Arnold’s latest book with Seedbed, Seeing Black and White in a Gray World: The Need for Theological Reasoning in the Church’s Debate over Sexuality.