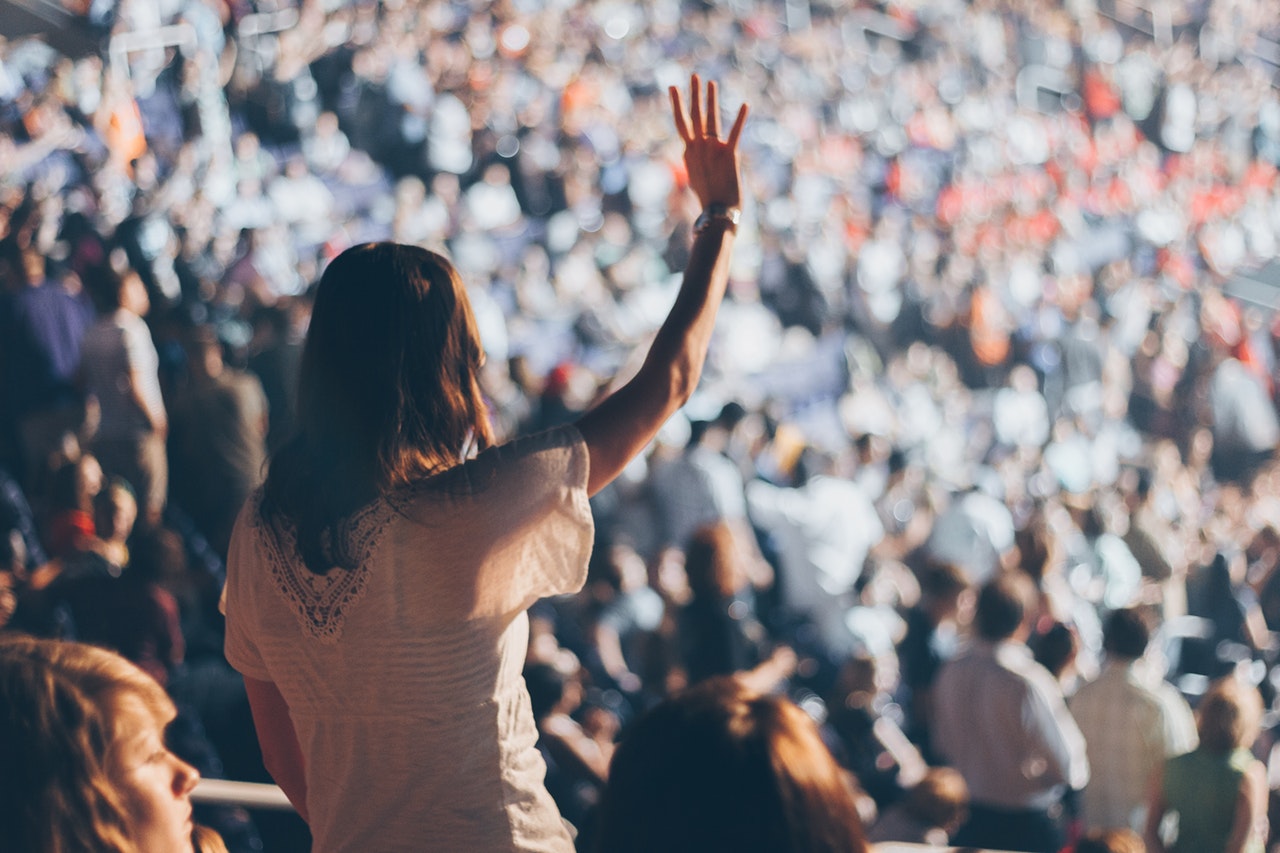 Awakenings are surges of the Spirit exalting Jesus over an area. The early believers in Jerusalem witness the first wave. On that day Peter quotes a prophecy of Joel to describe what is happening. He declares, “In the last days, God says, ‘I will pour out my Spirit on all people’” (Acts 2:17). God intends to honor his Son in these last days through awakenings. Since Jesus’ first coming, each successive wave drives the tide of history toward his return.

This article briefly looks at some awakenings in our history. Understand, it only samples a few. Countless more recorded revivals exist, not only from the West but from many other nations. Some are going on right now! God seeks a people who dare to risk for another great awakening. It’s our prayer this little taste stirs you to join that company.

Moravians and other religious refugees flee to Germany, finding asylum on the estate of Count Nicholas von Zinzendorf in Saxony. Doctrinal differences create disunity among the people so Zinzendorf calls the arguing refugees to pray. On August 13, 1727, three days after God’s presence is felt in a prayer service, revival comes in power at a communion service. Being transformed from religious bickering to unity and joy, the people quickly organize a relay of continuous prayer watches to secure and increase the work of the Spirit. Within weeks another wave of revival comes on the children holding their own prayer gatherings. Moravians begin to fan out over the world as missionaries, even bringing two English brothers, John and Charles Wesley, to salvation and influencing the British Great Awakening. Their continuous prayer watches last a hundred years, spreading salvation, holiness of life, prayer, and the nearness of Christ.

In December of 1734, Jonathan Edwards sees the spark of revival one Sunday through five or six conversions at his Northampton church in Massachusetts, so he calls the people to start praying. Six months later three hundred people are saved, and within two years Edwards reports that God’s manifest presence is felt over the entire town. The revival quickly spreads throughout the Northeast by the preaching of Edwards and three brothers named Tennent. It advances again in 1745, when George Whitfield’s visit to America triggers another surge in Northampton and other communities. Salvation for many unbelievers and a deep experiential encounter with God’s love among believers characterize the revival. Lasting twenty-six years, the awakening transforms the moral character of the American people and prepares them for the miraculous birth of their nation.

On January 1, 1739, John and Charles Wesley, George Whitfield, and other friends are gathered in prayer with a group of Moravians when the Spirit overwhelms them with revival power. Six months later John Wesley and George Whitfield are preaching in the open fields to crowds of fifteen thousand or more from all levels of society. The revival literally shakes individuals with God’s power   until all of England is influenced. George Whitfield travels to America thirteen times, sparking revival through his preaching in both countries. John Wesley secures and spreads the revival for the next fifty years by organizing his people into small weekly cell groups. The revival is characterized by countless salvations and believers entering a life of holiness through an encounter with God’s perfect love. Many believe England’s radical transformation through this awakening saves it from a bloody revolution like the one in France.

Barton Stone, a Presbyterian minister, witnesses a work of the Spirit at a small outdoor camp meeting in Logan County, Kentucky. A year later in 1801, at Cane Ridge in Bourbon County, he holds a camp meeting that explodes on the American scene as the largest, most spectacular revival in the 1800s. The attendance, estimated as high as twenty-five thousand people, is made up of non-believers and believers from all denominations. The Presbyterians end up tossing away this revival hot potato with its unusual physical manifestations. The Methodists and some Baptists pick it up and start running with it. Over the next thirty years the camp meeting becomes an effective delivery system for revival, transforming many parts of the nation, particularly the South. The revival is marked by countless salvations, experiences of heart holiness, and strong manifestations of the Spirit.

Three revival streams converge to become another American Great Awakening, peaking in 1859, with a million people converted in that one year. The first stream is Charles Finney, a lawyer saved and filled with the Spirit on October 10, 1821. His powerful experience in the Holy Spirit launches him as a revivalist in the northeastern United States from 1824 to 1834, culminating with a move of God in Rochester, New York, that spawns revivals in fifteen hundred towns. He gives some lectures on revival and later publishes them in a book, increasing hunger for revival and triggering many outpourings over the world. The second revival stream is a Methodist couple, Walter and Phoebe Palmer, who preach an experience of holiness through the baptism of the Holy Spirit. They help bring revival to Canada in 1857, and in portions of the United States and England. The third stream is Jeremiah C. Lanphier of New York, who starts a prayer meeting with other businessmen in 1859. After a market crash in October, the noon prayer meeting goes daily, and similar prayer meetings spring up in cities across America, with some having attendance of six thousand. New York sees fifty thousand converts and the prayer meetings spark as many as two thousand local revivals across the country. The Second Great Awakening is marked by many salvations, believers being filled with the Holy Spirit for a holy life and God’s manifest presence, which is actually felt by sailors on ships entering the New York Harbor.

Three Methodist pastors—J. A. Wood, John Inskip, and William Osborn—determine to revive the camp-meeting movement as a delivery system for the waning holiness experience as preached by John Wesley and earlier Methodists. In July 1867, their first camp meeting calls people to salvation and believers to the baptism of the Spirit for holy living. Over the next fifteen years, fifty-two holiness camp meetings spring up primarily in Methodist circles, with some attracting more than twenty thousand people. The revival spreads from the northern states to the war-torn South and then to England, influencing there many groups like the Salvation Army and the Keswick Convention. By 1880 the revival is spawning Holiness denominations, evangelists, literature, and schools all over the country. The Holiness Revival manifests salvations, baptisms of the Spirit for holy living, healings, and a tangible sense of God’s experiential love.

Evan Roberts prays for and receives the Holy Spirit’s fullness with an intense compassion for the unbelievers of Wales. Holding a meeting at his home church on October 31, 1904, the Spirit comes in power. Evan starts traveling with a team of young adults, having countless revival meetings marked by prayer and worship. By January 1905, seventy thousand conversions are reported. Over the next three years, the news and visitors from the revival spread revival to at least twenty-two other nations. At the time the population of Wales   is a million, and one estimate places the number of conversions at two hundred and fifty thousand. The revival is marked by many salvations, believers being filled with the Spirit, joyous worship, intense prayer, and a tangible sense of God’s presence.

Inspired by the Welsh Revival, hundreds of people pray for revival in Los Angeles, California, when William Seymour, a black Holiness preacher, arrives in town from Texas. On April 9, 1906, he and seven others in a home meeting suddenly fall to the ground, speaking with other tongues. Attendance increases so quickly, the gathering is moved to an old warehouse on Azusa Street, where the meetings last through the days and into the nights. News of the tongues and other signs of power bring trainloads of people from across the United States. Within six months, missionaries go out from Azusa Street, while visitors scatter over the country spreading the same experiences. The revival peaks in three years, but spawns a movement still causing transformation in many nations. Countless salvations, baptisms of the Spirit with tongues, healings, holy living, and manifestations of the Spirit characterize the revival.

In Scotland’s Outer Hebrides two elderly sisters, Peggy and Christine Smith, continually praying for a move of God, get a vision of the empty   churches packed with young people. As the Spirit begins to manifest in their local church’s prayer gathering, the minister invites Duncan Campbell to the island to hold meetings. When he arrives the church is packed with people drawn from many of the surrounding villages. The meeting goes late into the night, with people falling prostrate and crying for forgiveness. The revival spreads to other villages, where a tangible sense of God’s presence is felt and heavenly music is heard on two occasions. Campbell continues his ministry for the next two years, with many of the converted becoming ministers and missionaries. The prayer meetings have larger crowds than the public worship services and bring a revival of countless salvations, baptisms of the Spirit for holy living, deliverances, and a strong sense of God’s presence.

On February 3, 1970, in a chapel service at Asbury College, a Kentucky school founded through the Holiness Revival, a student gives a spontaneous testimony, causing a rush of students seeking salvation and full surrender. God’s presence fills the auditorium, bringing a greater response of students and leading to the suspension of all classes. The next few days see hundreds of visitors from surrounding states, while the students go out across the country spreading revival to churches and colleges. The chapel service in the college auditorium continues nonstop for 185 hours through eight days and seven nights, becoming one of the longest uninterrupted revival   meetings. By summer, more than 130 colleges, Bible schools, seminaries, and countless churches experience revival. The revival is marked by salvations, baptisms in the Holy Spirit for holy living, testimonies, and God’s manifest presence.

After experiencing an empowerment of the Holy Spirit, Randy Clarke, on January 20, 1994, shares his testimony with 120 people at a Vineyard church in Toronto. The Holy Spirit comes in power on the congregation of John Arnott, with people falling to the floor, crying, and laughing. As word spreads about the unusual manifestations so many visitors come, the church moves to a larger building that accommodates a flow of hundreds of thousands of people flying in from all over the world. The revival spreads into North America, England, Mozambique, and many more nations. It spawns a new network of renewal churches and ministry schools over the world. Salvations, healings, releases from oppression, powerful manifestations of the Spirit, and a tangible sense of God’s love characterize the revival. 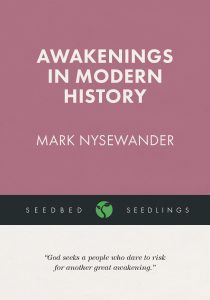 Are you interested in learning more about revival? Mark Nysewander writes about it in his book, Revival Rising: Preparing for the Next Great Wave of Awakening. This work explores the dynamics of high-impact revivals in the West, believing that even a limited knowledge of the supernatural realities in a revival can stir us to contend for God’s next wave of power. Get it from our store here. If you would like multiple copies of this article, get the Seedling, Awakenings in Modern History from our store here.