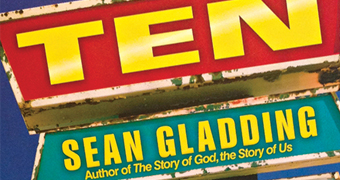 In the past couple of decades, The Ten Commandments have represented a fault-line in modern American “culture wars.” So how might pastors and congregations engage these texts in hopes of bearing spiritual fruit rather than only focusing conversation on questions of religious faith in the public sphere?

Ten: Words of Life for an Addicted, Compulsive, Cynical, Divided, and Worn-Out Culture (IVP Books, 2013) by Sean Gladding takes up this concern. As in his first book, The Story of God, the Story of Us, Gladding frames the content within a story. On the first page, we find ourselves stumbling into a give-and-take on current events between coffee shop regulars, including a pastor, a business owner, a non-profit director, an attorney, and a local retiree. The centerpiece of conversation is an article in the local newspaper about the cost to taxpayers for legal fees amassed in an attempt to defend posting of the Ten Commandments on government property. Each person has their own perspective, as we might imagine, and persons of various religious beliefs–or lack thereof–chime in.

“Instead of rules, God offers you a relationship, a covenant relationship. A marriage proposal, if you like.” (p. 21)

At the heart of Gladding’s presentation of the Ten Commandments is an understanding of them as ten life-giving words for the community rather than ten rules for individuals to follow. The characters in the narrative gain a habit of reminding themselves that the Decalogue was given to Moses in the wake of God’s saving grace for Israel in the Exodus event. The Israelites’ journey is not merely geographical—from Egypt to the Promised Land. It traverses self-understanding and shared identity, moving them from slaves to human beings. Making that journey requires community practices that reinforce what it means to be God’s chosen, covenant people.

Framing the Decalogue as practices that form us in relationship to God helps us think afresh about how to read, preach, and teach these texts.

The chapter titles reinforce this approach nicely. Each incorporates the negative command and casts it as the beginning point for a movement toward the needed positive virtue. Here are a few examples: “From Envy to Contentment,” “From Betrayal to Fidelity,” “From Striving to Rest.” By framing the commandments in this way, the reader is better able to join the conversation looking for the virtue embedded within these thou-shalt-not commands.

Wesleyan Christians will appreciate this in particular because it transforms the Ten Commandments from behaviors to avoid into a roadmap for “going on to perfection.”

Gladding’s content on the Ten Commandments is very good. The points he raises and fleshes out are clearly well-researched and evidence thoughtful reflection. But one of the gems of the book is the way he delivers his content. By telling a story about a group of people who discuss these Ten Words each week, we engage the content while listening in as others engage it too. A typical book format involves two perspectives, author and reader, in conversation with one another. But Gladding treats us to scripture experienced by a varied cast of characters. And these people represent religious and secular belief systems, in addition to other life experiences. The result is a vicarious exploration of scripture in community.

While I am attracted to the possibility that a group this varied could gather around the bible for meaningful, open, and respectful conversation in our day, I admit I find myself skeptical. We just seem so polarized. But perhaps I am giving up too quickly.

Gladding draws upon years of experience pastoring and teaching in faith communities with the sort of diverse perspectives and backgrounds displayed in Ten. His ministry background makes him an able guide. Perhaps hope for exploring scripture, even culturally-loaded texts like the Ten Commandments, is more possible than we may otherwise think.