Gospel-Shaped Worship: Why I Love Liturgy More Every Day 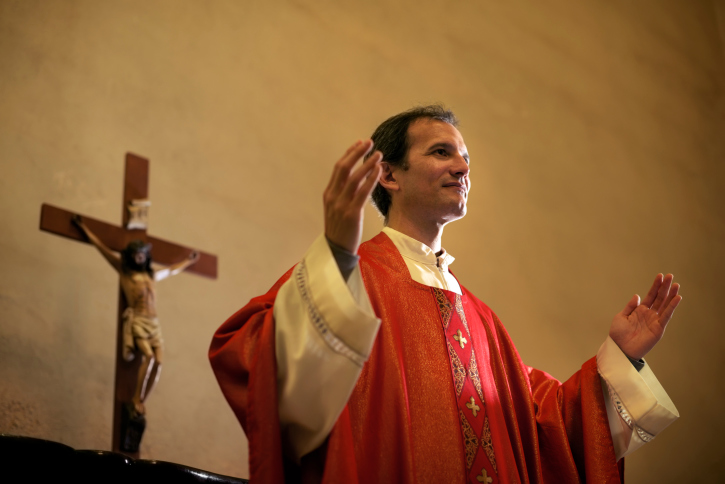 I’ve often thought of my life as having been lived on the edge of the liturgy. I suspect that perspective will resonate with many in the Wesleyan and Methodist tradition. We observe Advent and Lent. The colors on the pulpit and the communion table change with the season. We usually celebrate All Saints Sunday, and sometimes our pastors even preach the lectionary. Elements of liturgical worship are sprinkled throughout our worship life. Many suspect there is more going on, that there is a deeper coherence to the liturgical form of worship, even if we are unsure of what holds it together. We stick close to the side, hesitant to jump out into the middle of the stream, cautious lest we are carried off by a current that we cannot control and do not fully understand. We are unsure of where it will take us. Nevertheless, and despite our caution, some are captured by the inescapable inclination that we stand on the edge of something great, simultaneously terrible and beautiful, and we begin to take small steps forward into deeper water in order that we might drink more fully of the riches of the mystery before us. I offer here a few reflections on the early stages of my own journey from the edge of the liturgical stream into deeper waters. Perhaps these reflections will encourage those who read to join this exploration of the beauty and mystery of the liturgy.

The Form of the Gospel

Perhaps the most striking thing I’ve discovered about liturgical worship has to do with the structure of the service itself. As a self-described evangelical, I was excited to learn that the very form and progression of the liturgy is designed to proclaim the gospel. Here’s what I mean. As we progress through the order of worship: Adoration, Confession, Pardon and Assurance, Thanksgiving, Petition, Intercession, Word, Table, and Sending Forth, we tell the story of the gospel and the work of God’s grace in our lives. As our eyes are drawn in Adoration to the beauty of God’s glory and holiness, we experience conviction of sin and respond with Confession. The good news of God’s Pardon and the Assurance of forgiveness then falls on our ears, and we respond to that gracious declaration with offerings of Thanksgiving and prayers of Petition and Intercession. We are instructed by the Word and nourished at the Table before finally being Sent Forth in mission to the world. Reflecting on this movement, Bryan Chapell aptly concludes, “the common pattern of the order of worship in the church reflects the pattern of the progress of the gospel in the heart” (Christ-Centered Worship, 99). The form of liturgical worship takes its shape from the content of the gospel.

Many, like me, who for a long time stood with one foot in and one foot out of the liturgical tradition sometimes have difficulty understanding the purpose and coherence of these various acts of worship. We are refreshed to find that the shape of the liturgy is defined by the gospel. That the gospel itself is built into and governs not only the content but the very form of liturgical worship ought to appeal to evangelicals. We are supposed to be gospel people. Why wouldn’t we want to the gospel to permeate and govern the form of our worship?

The Formation of Habit

Another concern that those of us with limited experience of the liturgy have voiced is that doing the same acts of worship in the same way week after week has a tendency to weaken them by making them common, casual, and a matter of rote memorization. My perspective on this has changed quite a bit through the years, due not least to the influence of James K. A. Smith’s Cultural Liturgies project. Smith recognizes that the world is full of liturgies, both secular and sacred, and these liturgies are deeply formational. They shape our desires. They shape our habits. They make us certain kinds of people because they define what we love. In truth, there are lots of important things we do repetitiously. We do them because they are important, and they grow in importance because we do them with regularity. Repetition makes something part of who we are, whether it’s exercise, work, shopping, social media, or even worship. When we recognize that the form of the liturgy is gospel-shaped, we find that the regular praying of the liturgy will result in gospel-shaped loves, gospel-shaped habits, and gospel-shaped lives.

So, giving our hearts to the reading of the liturgy week-in and week-out is not going to undermine its importance by making it a matter of rote. To the contrary, weekly engagement in the gospel saturated form and content of the liturgy will form our hearts and bodies after the shape of the gospel. The way we pray on the Lord’s Day will work its way out and shape the way we live every other day of the week. This resonates deeply with my Wesleyan sensibilities that affirm the power of God to graciously sanctify us through and through. By forming holy habits, liturgical worship is one of the key means of sanctifying grace. God has purposed the liturgy in order that we might increasingly manifest his holy character as we grow in likeness to the One we worship. The hope of real transformation is central to liturgical worship.

Further Up, Further In

Near the end of C.S. Lewis’ The Last Battle, as the old Narnia gives way to the new Narnia, the children in the story are invited to come further up and further in to Aslan’s new creation. Those same words well describe the invitation of the liturgy: Come further up and further in to the worship of the triune God, the One who is himself infinite and eternal self-giving love. One of the most exciting aspects of this journey of ever deepening appreciation for liturgical worship is the knowledge that the path will always lead to a deeper and deeper experience of God, because the infinite depths of his mysteriously matchless beauty are inexhaustible. The journey of worship to behold the glory of God is always forward moving, and even when we see him face to face and worship in the full light of the glory of the presence of the Lamb, the invitation shall always be: come further up and further in.

Gospel-Shaped Worship: Why I Love Liturgy More Every Day