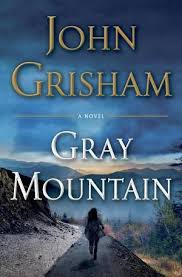 I thoroughly enjoyed this book. So will you. John Grisham’s novel Gray Mountain has everything and almost begs to be made into a movie.

Plot summary, without revealing too much: Samantha Kofer is a 29-year-old single, multi-talented, well-paid attorney in lower Manhattan just as Wall Street collapses in 2008. Lehman Brothers has just gone under. Everyone in Samantha’s huge law firm is running scared.

Through an intriguing twist of circumstances, Samantha ends up doing pro bono work for a legal aid clinic in a small Appalachian city in Virginia. She’s been placed on a one-year furlough by her firm. Question: Will she ever return to Manhattan (which she loves), or remain in Appalachia’s tough coal country?

Samantha’s personal story has all the ingredients of a good tale—romance, intrigue, danger, success and failure, highs and lows, idealism battling realism. The larger tale however concerns strip mining, mountaintop removal, and the political, economic, and legal power of Big Coal.

At one point Samantha flies in a small plane above the scars and devastation of strip-mined mountains. Having done this myself in West Virginia some years ago, I can imagine the scene: Gigantic machinery (out of sight of highways). Rocks, trees, and earth shoved into valleys. The ugliness that produces beautiful profits but poisoned streams, sickened miners, impoverished towns. Not to mention massive pollution reaching far beyond Appalachia as coal is “washed,” transported, processed, and eventually burned up.

Grisham has done his homework, both academically and on the ground. His brief Author’s Note at the end makes this clear.

Some tidbits I especially liked:

“Strip-mining is legal because of federal law, but the actual process is loaded with illegal activities” (p. 55).

“Because he was poor and broke, his case was handled differently” (that is, unjustly) (p. 88).

“Driving back to Brady, Mattie said, ‘A license to practice law is a powerful tool, Samantha, when it’s used to help little people’” (p. 133).

The book is a page-turner, but also enormously informative, especially regarding the use and misuse of law. Once again Grisham puts his legal training to good use.

If you read the book (which I hope you do), I encourage reading it in tandem with Barbara Kingsolver’s masterful Flight Behavior (2012). The two novels are quite different. Samantha Kofer and Dellarobia Turnbow are from starkly contrasting worlds. (I wish they could meet!) Both books however are set in Appalachia and both tell stories that intersect with pressing current issues. Both have creation care themes.