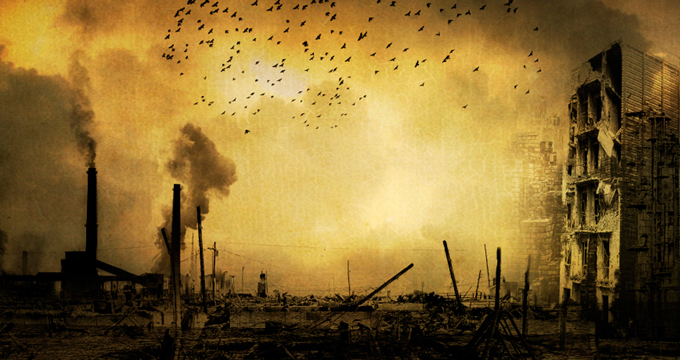 The end of the world.

But a lot of folks took the end-times very seriously, including my mom’s Sunday school teacher. Almost every lesson involved reading the headlines and getting ready for the end, which could come at any moment. She taught the class from cassette tapes and books by popular end-times preachers. Using current events and Scripture, they attempted to predict a target date for the return of Christ. They said there would be global cataclysms to signal the end of the world, and the big question she wanted answered was, “Are you ready?

Then one day, the teacher and her family disappeared.

They sold their house, quit their jobs, and moved to rural Texas. They bought some remote property, stocked up on food, water, and other supplies… and waited.

Five years later we saw them at the grocery store, after they moved back.

Not long after I started seminary, during my intro classes to the Old & New Testament and systematic theology, I began to realize everything I had been taught was wrong.

In the Sermon on the Mount, Jesus told his followers not to worry about what happens tomorrow (Matt. 6:25-34). However, the fear of tomorrow has helped create an end-times industrial complex. A lot of ink has been spilled trying to interpret the last days, the end of the world, and the role of Christians in all of it. Many preachers, teachers, conferences, books, movie – all aimed at predicting when Christ will return and what will happen to the world – have steadily flooded the Christian consumer market.

At the heart of this machine is an idea called the rapture, when Christians are supposed to disappear, and an already dark world will be plunged into utter despair before Jesus returns to settle the score.

This industry is massive, with the Left Behind series of books and movies arguably the most popular and influential. The tales of getting Christians off the Earth before the world get really bad have left behind a major, and unholy, mark on Christianity in America. Most end-time predictions operate from a place of fear, and as Yoda said, “Fear leads to anger, anger leads to hate and hate leads to suffering.”

In one way or another, rapture theology has created fear, anger, hatred and even suffering… all in the name of Jesus. For the sake of the Gospel, it is time to leave theology of Left Behind well behind us.

Since graduation I’ve had the privilege to teach about the history and impact of rapture theology to campus ministries and local churches, and I often meet pastors and parishioners who are afraid to turn the page from Jude to Revelation. John’s letter can sound scary and confusing, and often the easiest voices to find and listen to are those from the rapture theology industry.

Into this industry I am attempting to tell an alternate story.

Leaving Behind “Left Behind”  is a simple primer into the the world of the rapture theology. It is not an exhaustive historical or exegetical study of end-times theology or the book of Revelation. This is a Google Earth view from 40,000 feet, looking down at the major markers on the map. It is a different starting point for the conversation, looking at where rapture theology came from, why we need to leave it behind, what we can expect when Christ does return, and why we can embrace it with hope instead of fear.

Download Leaving Behind Left Behind free in our store now.

View all of our resources on the End Times.