On Sunday morning July 10, a 40-something gamer in my congregation approached me in between our two worship services and said, “I don’t know if you know anything about Pokémon Go, but our church is a gym and that’s a big deal.”

I suddenly felt sympathy for all the people who have suffered through my use of Greek or Hebrews in sermons because I had no idea what he was talking about.

Fast forward 48 hours, during which I consulted blogs, pastors’ groups on Facebook, my teenagers, and my colleague Darick, and I not only knew what Pokémon Go was, I knew our church had been given a wonderful opportunity to meet people in our community. Our church building sits atop a steep driveway, and we don’t generally have people stopping by. Or we didn’t, until the Big Brother Gamemaker in the Sky made us a PokeStop and a gym.

We wanted to extend hospitality to the many people of all ages who venture up our hill to play the game, so we changed our church sign to read “Welcome Trainers.” We set up a table with a water cooler and cups, and made signs pointing people to our “charging stations” (electrical outlets on the side of our building). We posted signs inviting people to check in on social media, providing the QR code for our Facebook page. 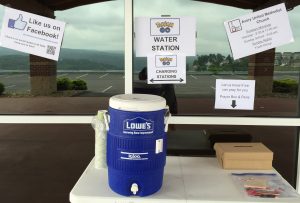 After a player asked for prayer early one morning, we decided to put out a prayer box, pens, and prayer cards. The requests we found in the box each morning were unreal: infertility issues, a husband with a degenerative disease, unemployment, a person thanking God for two months of sobriety. People also came into the sanctuary to pray during the day.

We began to get buzz on social media from players. The response to our simple efforts at hospitality earned us the designation of “coolest PokeStop” by someone who checked in on Facebook when she stopped by to play. The posts were bittersweet, as they usually said something like, “I can’t believe that a church is being so welcoming!” It was both a compliment to our church and an indictment of the Church.

We hosted a community party a week later, dropping lures at our PokeStop. I invited church members to bring snacks to share, come meet the players, or just to sit and visit. One church member asked if they could bring hot dogs. Another church member asked if we could set out a box at the party to collect food donations for flood victims in our state. The local newspaper covered the party, and not only did we make the front page, they posted a video interview about the party on their webpage.

As the players have continued to come, we’ve received thank-yous scribbled on napkins, an anonymous $2.50 donation, and a sweet note from two players who adopted a stray kitten who apparently lurks around our building at night. We’re excited about the unplanned opportunities this game has presented us with, and grateful that these simple efforts help non-church goers to know that churches are welcoming places and that God’s love extends to all.

Rev. Jenny Williams is the pastor of Avery United Methodist Church in Morgantown, WV. She is only a level five player, and despite the counsel of her children to not join Team Instinct (“It’s the Hufflepuff of Pokemon, Mom!”) she did anyway.