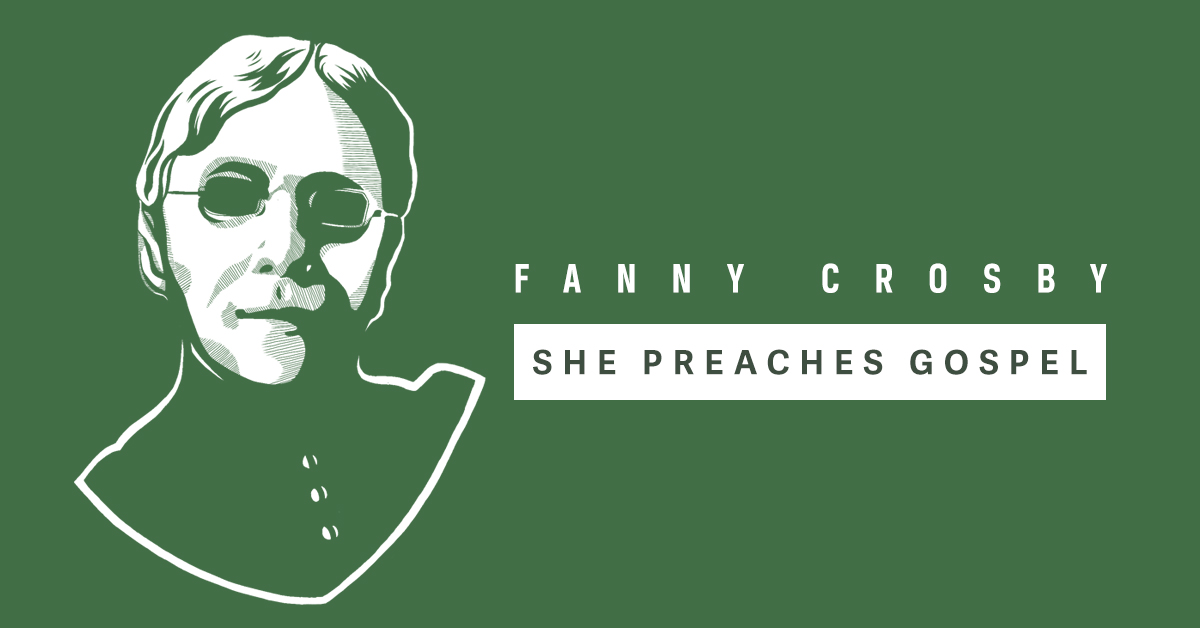 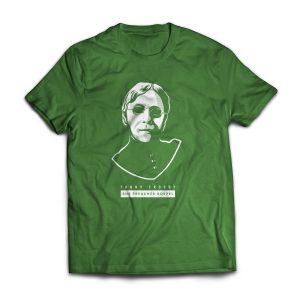 Frances Jane Crosby was born on March 24, 1820 to Mercy and John Crosby. Better known as Fanny Crosby, she was a teacher, a poetess, a mission worker, and a public speaker. When she was six weeks old, an incompetent physician placed hot poultices on her eyes to treat an infection that she had when she was six weeks old: a treatment she claimed caused her to become permanently blind. One of her biographers, Edith L. Blumhofer, suggests that it is more likely that her blindness was congenital, but the family believed that it stemmed from the ill-advised treatment.

Fanny’s father died in November of 1820, leaving her mother, Mercy, a widow at the age of twenty-one. To support herself and Fanny, Mercy worked as a domestic servant while Fanny’s grandmother, Eunice, cared for and taught the blind child. When Mercy took employment in Ridgefield, Connecticut, she and Fanny moved too far away from her parents’ home for Eunice to continue to teach Fanny. Mrs. Hawley, their landlady, assumed the responsibility for Fanny’s education. Under Mrs. Hawley’s tutelage, Fanny memorized large portions of scripture and other literature and also learned to sing and play the guitar.

Fanny’s opportunity for formal education came when she was accepted as a student at the New York Institute for the Blind. She enrolled just two weeks before her fifteenth birthday, and she remained at the institution for twenty-three years—eight as a student and fifteen as a teacher. Fanny received a good education, honed her poetry skills and became an accomplished musician, learning to play the piano, organ, and harp. In 1844, she published her first book, The Blind Girl and Other Poems, and was frequently asked to welcome visitors to the institute with poems. She essentially became the institute’s “exhibit number one” (Ruffin, 46-47). In 1844 and again in 1846, she appeared before Congress as a representative of the institution and met several U. S. presidents.

In 1838, Mercy married Thomas Morris, a widower. During their marriage, she bore him three daughters. The first died, but two—Julia (Jule) and Carolyn (Carrie)—survived. Unfortunately, the marriage was short lived. In 1846, Thomas Morris joined the Mormons and went west, but Mercy refused to join him and would not let him take their daughters with him. Mercy was left to raise Jule and Carrie on her own. Fanny maintained close contact with her family, visiting her mother and half-sisters in Bridgeport each year during school vacations.

Fanny grew up believing in God. The Quaker and Puritan people among whom she lived had a devout faith and believed that each person needed to have a personal conversion experience. In the fall of 1850, Fanny attended several Methodist revivals and began to earnestly seek God. She had a conversion experience on November 20, 1850 and said, “I realized for the first time that I had been trying to hold the world in one hand and the Lord in the other” (Crosby, 112). This moment “marked the beginning of a deepening Christian experience and a beginning of the total dedication of her life to God” (Ruffin, 69).

In March of 1858, Fanny left the New York Institute for the Blind and married Alexander Van Alstyne on March 5, 1858. He was also blind and had been both a student and an instructor at the institute, but he eventually left to teach private music lessons in Long Island. She had a baby, but the infant did not survive. Fanny reported to S. Trevena Jackson who interviewed her shortly before Fanny died, “God gave us a tender babe but the angels came down and took our infant up to God and to His throne” (Jackson, 57).

Little is known about their marriage except that they rented rooms in working class neighborhoods and moved frequently. Van Alystyne insisted that since Fanny was already well known, she should use her own name professionally. Fanny traveled a lot, but her husband did not accompany her on her trips. They were together for some years, but although they “maintained an amicable relationship” (Blumhofer, 314), they had separate addresses during the 1880s and 1890s. They were living separately when Van Alystyne died on July 18, 1902. Regarding their marriage, Fanny said only, “We were happy together for many years” (Crosby, 130).

Fanny’s career as a hymn writer began in 1864 when she collaborated with William Bradbury, a well-known hymn writer of the day. After listening to a tune he had composed, she wrote words to go with the tune and took them to him. She later said, “It now seemed to me that the great work of my life had really begun” (Crosby, 112). At first she worked for Bradbury and Company, and after Bradbury died in 1868, the company was reorganized and renamed Bigelow and Main. Her association with Bigelow and Main continued until her death in 1915.

She wrote so many hymns that Bigelow and Main convinced her to use pen names so the public would not know that they depended so heavily on a single writer. She also collaborated with others, including Howard Doane, and Phoebe Palmer Knapp. For years she had a close association with Dwight Moody and Ira Sankey and collaborated with Sankey in writing hymns for the Moody/Sankey crusades. It is impossible to know the exactly how many hymns she penned, but she wrote 5,959 hymns for Bigelow and Main alone. Most authorities estimate that she wrote at least 8000 hymns, but a Fanny Crosby movie released by Gateway films credits her with writing 10,000 hymns. Some of her better known hymns include “Blessed Assurance,” “Safe in the Arms of Jesus,” “Rescue the Perishing,” “Pass Me Not,” “Oh Gentle Savior,” “I Am Thine, O Lord,” “All the Way My Savior Leads Me,” “Tell Me the Story of Jesus,” “He Hideth My Soul,” and “Redeemed How I Love to Proclaim It.”

Fanny was also a frequent speaker in churches and camp meetings, and she worked in several missions in New York City slums. She was especially active in the Bowery district, worked with street car conductors and bus drivers, and became a frequent speaker at YMCAs all along the East Coast.

In 1900, her sisters contended that at the age of 80, she should no longer be living alone. They insisted that she go with them to Bridgeport, Connecticut. After sixty-five years, her New York residency came to an end. In Connecticut, she first lived with her sister Carrie (Carolyn) who served as her secretary. After her sister Carrie died, Fannie moved in with her niece Florence where she lived until her death on February 12, 1915 (Ruffin, 217).

Order your Fanny Crosby t-shirt from our store today.