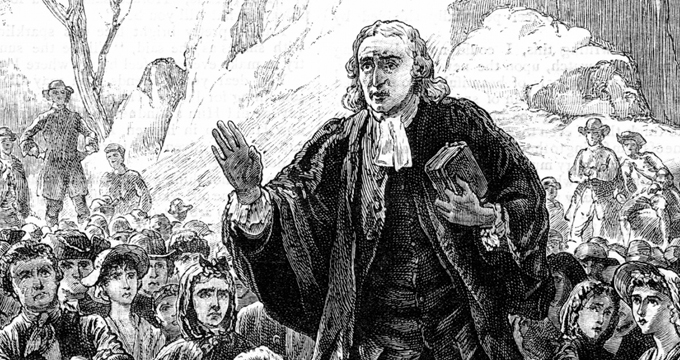 For many today, notions of “the wrath of God” may seem outdated, questionable, or even backward. Regardless, the theme of God’s wrath permeates all of Scripture and was a central theme in the DNA of the Wesleyan revival. Paul Lawler offers 4 reasons why we should retain this important doctrine.

Many Christians are praying for revival in North America.

While states legalize marijuana to glean new tax revenue, brokenness abounds while substance abuse and illicit behavior rise at alarming rates. Currently, we have over 2.2 million people incarcerated, more than any other nation in the world. Our illiteracy rate, which is almost 25% of the total U.S. population, carries crippling social effects for a democratic, capitalistic society.[i] Many wonder: is there is hope for a culture immersed in such deep grips of darkness?

In 18th century England, poverty was widespread and endemic. The nation was on the verge of revolution. One out of every four women were prostitutes, many of them as young as eight years old. Thousands died annually from syphilis and gonorrhea. Crime abounded. Slavery was widespread and brutal. Was there hope for a culture immersed in such deep grips of darkness?

Within that darkness of 18th century England, Wesleyan revival broke out. These revival pulses were so dramatic many historians credit them with ushering in the Victorian age in the early 19th century, a time when the poor began to matter and “doing the right thing” became important. A time when the social order was restored and the future began to beam with hope.

As the flames of revival broke out in what was once darkness, historians marvel at how the movement of revival was sustained for decades. While there were many important factors, many credit the Wesleyan society and class meeting with making the deepest impact upon the nation. In the words of Howard Snyder:

“The class meeting …became the sustainer of Methodist renewal over many decades. The movement was in fact a whole series of sporadic and often geographically localized revivals which were interconnected and spread by the society and class network, rather than one continuous wave of revival which swept the country…Without the class meeting, the scattered fires of renewal would have burned out long before the movement was able to make deep impact on the nation.” —The Radical Wesley

These societies and classes provided continual pulses of revival power which ultimately changed a nation. During this prolonged period of cultural transformation, a thought provoking question was consistently asked of participants. That question, which might be asked a thousand times upon one’s participation in a Methodist society over a lifetime, was as follows: “Do you desire to flee from the wrath to come, and to be saved from your sins?”

For many today, notions of “the wrath of God” may seem outdated, questionable, or even backward. Nonetheless, the theme of God’s wrath permeates all of Scripture and was a central theme in the DNA of the Wesleyan revival. Should we also consider the reality of God’s wrath as we seek to make disciples in the 21st century? John Wesley thought it so important that he and others framed an important question around this theme for every participant in the Methodist movement.

Should we not as well? Here are four reasons for our consideration:

1. God’s wrath is expressed in the entire Bible

Recently, a prominent pastor in United Methodism, when seeking to navigate seemingly difficult passages dealing with God’s wrath out of the Old Testament, proposed dividing Scripture into categories consisting of “buckets”[ii] and groupings based on how one may choose to view the heart of God revealed in Jesus Christ. The emerging rationale goes like this, “There are Scriptures in the Old Testament that seem to reflect the heart of God, and there are Scriptures that do not seem to reflect the heart of God. Therefore, let us seek to create categories for which Scriptures in the Old Testament we take seriously, based on how we chose to believe God has been revealed in Jesus Christ” (author’s paraphrased summary).

The New Testament also speaks explicitly of the wrath of God. If we characterize Old Testament accounts of God’s wrath[iii] “as not being consistent with God’s character revealed in Jesus Christ,” this potentially leads us to choose to overlook the New Testament expressions of God’s wrath. In the New Testament passageof 2 Peter 2:4-10, examples of God’s wrath out of the Old Testament are specifically referred to as examples of what God will bring again to a segment of humanity at an appointed time in the future. Ananias and Sapphira lay dead on the pavement in Acts 4 (Acts 4:32).   God, revealed in Jesus Christ, speaks of hell (Matthew 5:22, 29, 30, 10:28, 11:23, 18:9, 23:33) and condemnation (John 3:18), and “weeping and gnashing of teeth” (Matthew 25:30) dozens of times. The New Testament cites these realities repeatedly (John 3:36; Romans 5:9; Ephesians 2:3; 1 Thessalonians 1:10). This does not even take into account the book of Revelation, with its explicit descriptions of God’s wrath.

2. An understanding of God’s wrath is central in our Wesleyan heritage

It is hard for some to fathom that an “understanding of God’s wrath” as being central in our Wesleyan heritage. On the surface, a question like “Do you desire to flee the wrath to come?” sounds appalling to many who have grown up with a Methodist heritage in the 21st century.

For several years I taught at a historically United Methodist conference center where thousands gather every summer. Despite the majority of participants being active in local churches for decades, I was saddened by how many did not know basic teachings from Scripture or basic teachings out of the Wesleyan corpus. In one of the Bible studies I taught involving a large number of people, I asked participants to complete the following sentence: “Do you desire to flee the coming _____________?” Silence followed. No one knew the answer. No one even knew the question was ever asked in Methodism. When I began to explain the origins and the biblical reasoning for the question, many sat in stunned silence.

Why would John Wesley require Methodists to be regularly asked, “Do you desire to flee from the wrath to come?” John Wesley required this question to be asked because he read and believed his Bible. Not only that, but Wesley was deeply concerned about people and their souls. This question, along with the thought-provoking response it solicited, is a portion of the pattern that sustained revival in a nation for decades through the societies. Lest we suffer from chronological snobbery, let us take note of these originating impulses in our Wesleyan heritage.

3. A reverence for God’s wrath has the potential to jolt us out of bland, moral therapeutic deism

Because critical masses of people who have attended North American churches for decades suffer from alarming levels of biblical anemia, many have only a shallow and vague notion of God’s character.

A number of years ago, Christian Smith and Melinda Lundquist Denton studied the religious perspectives of the emerging generations in North America. Even though many involved in the study would “check the box” as being “Christian,” Smith and Denton’s research revealed the prevalence of distorted “understandings of God” which they describe as Moral Therapeutic Deism.

A streamlined interpretation of moral therapeutic deism would be as follows: A spiritual person, who has a vague notion of God, whose chief end is to be happy and fulfilled, knowing that one can call on God if one has a need; orone seeks to be a good person because “good people go to heaven when they die.”[iv]

Why would John Wesley ask people, “Do you desire to flee from the wrath to come?” John Wesley would ask people that question because he put his confidence in what was true over what was popular; and God honored the message as masses turned to faith in God’s justifying grace in Jesus Christ.

4. High reverence for God’s wrath magnifies the depth of God’s grace and mercy

It was John Wesley who said, “How a sinner may be justified before God, the Lord and Judge of all, is a question of no common importance to every child of man. It contains the foundations of all our hope, inasmuch as while we are at enmity with God, there can be no true peace, no solid joy, either in time or in eternity. What peace can there be, while our own heart condemns us; and much more, He that is ‘greater than our heart and knoweth all things?’ What solid joy, either in this world or that to come, while ‘the wrath of God abideth on us?’”[v]

Wesley was meticulously mindful that we are at enmity with God (Romans 5:10); and that we are under God’s wrath (Romans 5:9) apart from God’s justifying grace through Jesus Christ (Romans 5:1). But his articulation of these realities was not motivated by magnifying wrath and enmity, but by magnifying the radiance and appeal of God’s justifying grace and mercy through the Lord Jesus Christ.

In order for the culture to be renewed, as it was in the 18th century, the culture needed a revelation of God. But a revelation of God must flow out of a church that embraces God’s entire revelation.   This is why a people called Methodists regularly asked its adherents, “Do you desire to flee from the wrath to come, and to be saved from your sins?” Perhaps this is a question we should be regularly asking again.

[iv] Moralistic Therapeutic Deism consists of a series of combined beliefs: 1. “A god exists who created and ordered the world and watches over human life on earth.” 2. “God wants people to be good, nice, and fair to each other, as taught in the Bible and by most world religions.” 3. “The central goal of life is to be happy and to feel good about oneself.” 4. “God does not need to be particularly involved in one’s life except when God is needed to resolve a problem.” 5. “Good people go to heaven when they die.” See Christian Smith & Melinda Lundquist Denton, Soul Searching: The Religious and Spiritual Lives of American Teenagers (Oxford, 2009).