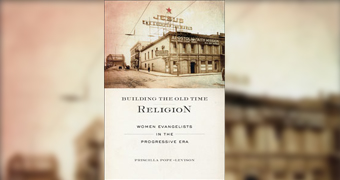 Priscilla Pope-Levison is a Professor of Theology and Assistant Director of Women’s Studies at Seattle Pacific University. In her newest work, Building the Old Time Religion, she shares the untold stories of women evangelists during the Progressive Era (1890-1920) who “transformed the quintessential expression of American Christianity – evangelism from an itinerant practice into the grand task of institution building.”

For those of us who are only familiar with names like Jonathan Edwards, Charles Finney, Dwight Moody, Billy Sunday, and Billy Graham, it is time to learn of their forgotten female peers such as Maria Woodworth-Etter, Martha Moore Avery, Alma White, Evangeline Booth, and Florence Louise Crawford.This study concludes with the work of Aimee Semple McPherson, the better-known evangelist and founder of the International Church of the Foursquare Gospel, but without these other women we may not have ever had McPherson. These women were her precursors who worked outside the established structures that denied them ordination and who were denied other opportunities because of their gender.

Pope-Levison divides her book into four chapters, each covering an important aspect of the transition from itinerant ministry to institution building. In Chapter 1 (“Tents, Autos, Gospel Grenades: Evangelistic Organizations”) we learn about the women who traveled the United States proclaiming the gospel and the organizations they created to help them do this. This includes insightful discussions on homiletical methods and theology, ecstatic experiences, organizational development and structure, and the cost—both personal and monetary—it took to keep the mission alive.

In Chapter 2 (“Mothers, Saints, Bishops: Churches and Denominations”) tells of those who moved from itinerant work alone to created established churches and denominations. The reader is given an honest examination of the victories and defeats of those women who sought to be the head of spiritual hierarchies in a patriarchal world.

Chapter 3 (“Biblical, Practical, Vocational: Religious Training Schools”) is the most interesting of the book in my opinion. While we know today of Moody Bible Institute, BIOLA, and Gordon College, we’re far less informed of those educational institutions created by women. Many of the students who attended would not have been able to find the same training elsewhere since these colleges—like other “Bible colleges”—didn’t require the prerequisite of an undergraduate degree, but instead sought to give students training in Bible and practical ministry in preparation for their religious-vocational activities.

As one might expect, many of these schools faced opposition, like the Epworth Evangelistic Institute, which was co-opted by male Methodist clergy who forced Iva Durham Vennard to depart the school she built because of her gender.

Finally, Chapter 4 (“Soap, Soup, Salvation: Rescue Homes and Rescue Missions”) addresses the social work of those who sought to help society’s marginalized—the impoverished, the immigrant, the sex-worker, etc.—and how (like many other Christians in the late nineteenth, early twentieth centuries) they struggled with relateing the gospel of saving souls to the social gospel.

Pope-Levison is to be admired in her honest depictions of these women. She is correct in her claim that this is no hagiography. We learn of these women’s failed marriages, their semi-abandoned children, and at times, their near cult-like dictatorial leadership—in other words they often fell trap to the same temptations as male evangelists, but with a higher cost to their reputation because of the social mores of their days.

That said, for every struggle and failure we meet women who arose to prominence doing great things for God while spreading the gospel to many people. Unlike their male counterparts who often had more funding and stronger support networks these women fought against the odds, often barely keeping their ministries alive financially, in order to follow God.

For the historians among us there are several themes that will likely emerge from the book as quite interesting. The first is how women today face many of the same obstacles to the full realization of their humanity, especially in the Church. The second is how along with conflicts over gender roles the evangelicalism of their days wrestled primarily with what to do about modern science (especially Darwinism) and higher criticism of the Bible. Arguably, these are three of the most contentious subjects for evangelicals today as well.

The third is how many of these women preferred male heirs to their ministries. In other words, these pioneers often participated in lateral violence against their own gender, demeaning rather than empowering other women. Often they hypocritically reinforced society’s gender expectations on other women while seeing themselves as exceptions.

Fourth, I came to admire the willingness of many of these women to give all to do what they believed God had called them to do, even when the sacrifices were questionable. The obstacles they faced to a balanced life continue to be problems for modern clergy.

Finally, this book forced me to evaluate what it meant for women to minister outside of “established structures” when ordination wasn’t an option and how for better or for worse their acceptance by established denominations has resulted in an era where we see few women with the type of authority and influence held by those in the Progressive Era.

I recommend this book for anyone interested in gender studies as well as the development of Christianity in the United States. This is truly a “history from below” telling the story of those that would be forgotten if society’s sexist inclinations were to be embraced. Also, many Methodist and Pentecostal women feature prominently in Pope-Levison’s narrative. For those in these traditions, or adjacent traditions, there is a lot one can learn about one’s own ecclesial history.

Read more of our Book Reviews.