The Benedict Option: A Strategy for Christians in a Post-Christian Nation? - Seedbed
close
Menu 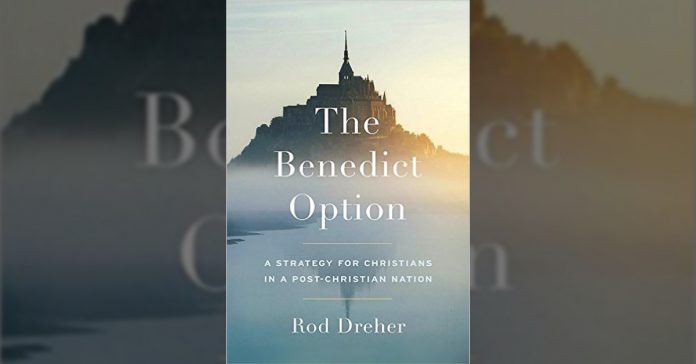 Much anxiety in the American Church today (and particularly in my United Methodist Church) concerns decline in worship attendance and other key participation and growth indicators. This is an important concern to be sure, as religious affiliation for Christian denominations is declining while the number of people with no affiliation is increasing. And yet, larger trends in broader Western culture and within the American religious landscape threaten not only attendance in Christian churches but, more significantly, the survival of a faith that is recognizable as historic, orthodox Christianity.

The unmasking of Moral Therapeutic Deism a little over a decade ago as the actual belief system of many religious Americans in Christian denominations, among both teenagers and adults, served as an initial wake-up call that Christianity was not being well formed even in the lives of many church-goers. In July 2015, the United States Supreme Court’s legalization of same-sex marriage represented the conquest of a new beachhead for LGBTQ rights, and it was the natural next step as American attitudes toward sexuality and the body shifted over the course of fifty years since the Sexual Revolution of the 1960’s and at a remarkably accelerated pace over the past fifteen years as public support for same sex marriage essentially reversed from 57% opposed and 35% in favor in 2001 to 37% opposed and 55% in favor in 2016.

So, what ought traditional, orthodox Christians in North America do to strengthen and sustain our faith and moral formation, and that of our families? How might we be prepared for mission in this new cultural landscape?

Rod Dreher, a journalist, author, and blogger at The American Conservative, raises this issue and proposes an answer in his new book, The Benedict Option: A Strategy for Christians in a Post-Christian Nation (Sentinel, available March 14, 2017). He names this purpose up front: “I have written The Benedict Option to wake up the church and to encourage it to act to strengthen itself, while there is still time.” (3)

What is the “Benedict Option”? 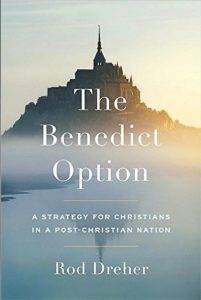 The Benedict Option takes its name from St. Benedict of Nursia who founded monasteries and wrote a rule of life for monks who would live in Christian community, set apart so they might be deeply formed in the Christian faith and life. Dreher’s proposal is for the church to sharpen the distinctiveness of Christians by creating and strengthening institutions that can nurture Christian faith in believers living in a society at odds with Christian belief and morality. This is necessary, he contends, because Christians will soon be required to pay a higher price socially, and even economically, for adhering to their beliefs and ethics. Only those who have been well-formed in the Christian faith will have sufficient reason and capacity to withstand the social pressure and resist the cultural tide.

Some readers will criticize Dreher for overstating the threat to Christianity, for advocating too much withdrawal and not enough cultural engagement, and/or for drawing too hard a line on Christian morality regarding sexuality and the body (indeed, some have already). Others may be reticent to adopt his proposals wholesale, but will suspect he is onto something important. Regardless, serious Christians will benefit from a careful reading and consideration of the Benedict Option strategy.

The book’s most important contribution is in pressing the need for a church-wide conversation on how best to nurture and pass on the historic, orthodox faith in a truly post-Christian nation and society. Within this, Dreher gets specific, issuing a number of challenges to the American Church.

Dreher challenges the church politically. “The Benedict Option calls for a new Christian politics, one that grows out of our own relative powerlessness in contemporary America.” (88) Political influence is fleeting (consider mainline denominational groups that championed the temperance movement at the beginning of the twentieth century), and he is concerned that the influence gained when political machinations and the church come together may, at best, result in Pyrrhic victories for Christian values in the end. But there are still opportunities for creative influence in a new-found weakness that do not result in compromises that go too far. Dreher reminds us that “the parallel polis is not about building a gated community for Christians but rather about establishing (or reestablishing) common practices and common institutions that can reverse the isolation and fragmentation of contemporary society.” (94)

Another challenge comes regarding education, advocating for a return to classical Christian education by building private institutions. (There are already growing networks of these to join too.) This will likely be the most challenging prescription for Methodists and others who have traditionally invested themselves in supporting their community’s public schools. Regardless how a believer or congregation decides to engage public schools in mission, this section warrants careful listening and consideration. Perhaps this area is where a central positive theme of the book comes to the forefront: “[Y]ou cannot give what you do not possess.” (102) Possessing the authentic, classical faith is possible while also growing up within public schools and some orthodox Christians will continue to work, educate their children, and engage in mission within this sphere. But we dare not ignore the powerful force our schooling represents, both for good and for ill, when it comes to shaping our children’s worldview and moral imagination.

Dreher addresses several other subjects in his challenges to the contemporary church, including worship and technology. The recommendation that is simplest to implement and requires only the will to do so is to “turn your home into a domestic monastery” where life is ordered toward God, prayer and scripture are frequently shared, the life of the church is prioritized, and boundaries are maintained in order to protect against intrusions that are hostile to faith formation. (Here I must point to the Seedbed resource, Grow at Home: A Beginner’s Guide to Family Discipleship, a short book that addresses this simply and directly.) Parents must model the faith for their children and train them up with priorities and practices that embody their commitment.

Though begun as a renewal movement, Methodism of late has tended to reflect its societal context rather than stand apart in social and political attitudes. But our heritage has much to offer. The Methodist revival in England and America was initially insistent on advancing the work of God in one’s life after he or she came to faith, rather than ceasing at the point of coming to faith. Methodist societies were rigorous and demanding, therefore they had the power to shape belief and behavior in the lives of participants. Their self-understanding as distinct both from the world and the nominal church-goer, coupled with their intense commitment to growth in holiness insured that they possessed the deep formation in Christ that could stand apart as good news to their neighbors and the world.

This Methodist heritage may be a helpful lens through which to understand the Benedict Option approach. Dreher will be misunderstood by some to advocate giving up on mission. Where he advocates distance from cultural forces and institutions, ultimately the underlying purpose is distinction, not disengagement. Again, “you cannot give what you do not possess.” The early Methodist Societies’ sharp boundaries made possible their members’ deep formation in the Christian faith and its missional imperative. Likewise, the Benedict Option’s call for Christians to shed naïveté about the shaping influence of the culture serves both a formational and missional purpose. Formationally, it is about having a robust and effective strategy for sanctification. Missionally, it is about having something of real value to offer a world without the Gospel.

Dreher’s warnings and prescriptions will be greeted with criticism. Many creed-confessing Christians have nonetheless followed American culture on matters of sexuality. Some Evangelicals will be slow to warm to a prescription that includes elements of withdrawal, an understandable response considering historic mis-associations with the reactionary fundamentalist Christianity from which it has been distancing itself. And many Christians who are traditionalist on sexuality and sexual morality, who, seeking to right previous wrongs of the church toward LGBTQ people, will bristle at naming the theological and philosophical differences on sexuality and the body with such clarity. They may be, therefore, reticent to embrace the urgency of Dreher’s argument.

Yet the challenge remains. Will historic, orthodox Christianity survive the twenty-first century in North America—that is to say, among our children and grandchildren? If the answer will be yes, I suspect it will be because Christian parents and communities practiced at least some form of The Benedict Option.

© Seedbed 2021
The Benedict Option: A Strategy for Christians in a Post-Christian Nation?
MORE STORIES